Missing the winter already? Staring wistfully at your salopettes?

Don’t you worry – there are actually plenty of summer skiing opportunities and I am not talking about at your local snow dome. So if you are a complete snow head then fear not – you can cast aside your bikini when packing for your next summer holiday and head for the slopes at one of these amazing locations.

Extend your winter season in the US of A by heading to Mount Hood in Oregon. This ski area tends of keep it’s snow later than the European resorts and if you miss the lower powder fields there is also a glacier to give you snow surety and making Timberline Lodge the only resort in North America to offer year round skiing. Conditions here tend to peak in June and July so get your passport ready if you want to make the most of conditions this year.

Another option in the Americas is to head in the opposite direction and make the most of the mountains in the far south.

The oldest ski resort in South America is Portillo located in the Chilean Andes. This resort sits at 2,548 meters at it’s lowest! With it’s highest lift reaching 3,310m. The ski area was opened in 1949 but much of it was destroyed by avalanches in 1965 and rebuilt to host the Alpine World Ski Championships in 1966. 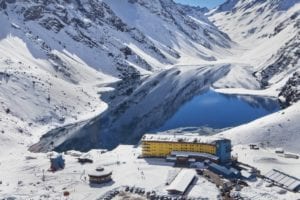 Great skiing can be found here in June, July and August meaning you can have an amazing summer snow holiday – especially if you stay at the resort’s iconic egg yolk yellow hotel.

Another South American Ski heaven can be found at the very southern tip in Argentina’s Cerro Castor ski resort. The ski season here runs from June to October and those who make the most of this can boast to have skied at the most southern ski resort in the world!

Australia has a number of ski resorts on offer most famously Perisher and Thredbo in the aptly names ‘Snowy Mountains’ near Canberra. The season here runs from June to October and offers amazing skiing for all levels and abilities. It is also a great draw for European ski instructors who cannot get enough of teaching and choose to head there – usually after an exotic stop off on a tropical beach – to teach for the northern hemisphere summer.

While it may not be the sunny Australian holiday you pictured don’t worry face tanning opportunities are still so plentiful that free suncream is handed out around resort. The pictures below come courtesy of Paolo from New Gen Courchevel 1850 and show this winters Aussie snow as well as the tropical beach he visited on his way – what a hard life!

Another great option for a southern hemisphere winter is the mountains of New Zealand. Given New Zealand’s reputation holy grail of outdoor enthusiasts it is unsurprising that there is a thriving ski industry there. With a few resorts on the North Island and many more on the South Island there is something for everyone, whether that be beginner runs, race camps or heli trips. The hub of New Zealand’s ski world is arguable Wanaka with access to Cardrona, Treble Cone, Snow Park and Snow Farm. With access to so much great skiing and the beautiful Lake Wanaka on your door step it is not surprising that so many people who travel here for ‘just one season’ never leave.

While there is amazing skiing to be found in the southern Hemisphere and North America you do not need to head so far from home to get your ski kicks in the summer as there is also a lot on offer on Europe’s Glaciers.

Hintertux in Austria and Zermatt in Switzerland are the only two ski resorts in the world who offer skiing 365 days of the year! And for many of us they are right on our doorstep. 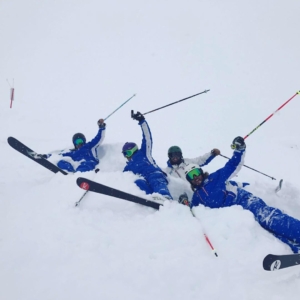 Hintertux in the Tyrol area of Austria reaches 3,250 meters at it’s highest and holds ice over 100 meters thick! In the spring when the season winds up throughout the rest of Europe BASI ski instructor hopefuls flock to this region for the string of ‘Tux’ exams. Among them are many of our own trainees and also our coaches who work for BASI as examiners. You can see from the pic below that they do not let this Austrian reunion distract them in anyway from the serious work at hand.

Across the border in Switzerland Zermatt provides a serious draw for mountaineers from across Europe. This is shown by the fact that only a third of the population was actually born there while a third moved to Zermatt from other parts of Switzerland and the final third from outside the country. Zermatt is not only the largest summer ski area in Europe but has pistes to suite every level. And the impressive views of the Matterhorn are inspirational for any mountain lover.

So there you have it – there is no need to spend your summer dreaming of winter snow you can hunt it down all over the world.