In my previous blogs, I’ve outlined what you should look for in ski-touring equipment and the tools that you can use to plan an enjoyable day out.  In the this article I’d like to show two examples of the planning tools in action.  The tours are from different years and might provide some inspiration as to what is possible near you.  Please note that because I’ve used tours in this article, doesn’t mean that they are necessarily valid for the BASI EMS logbook. 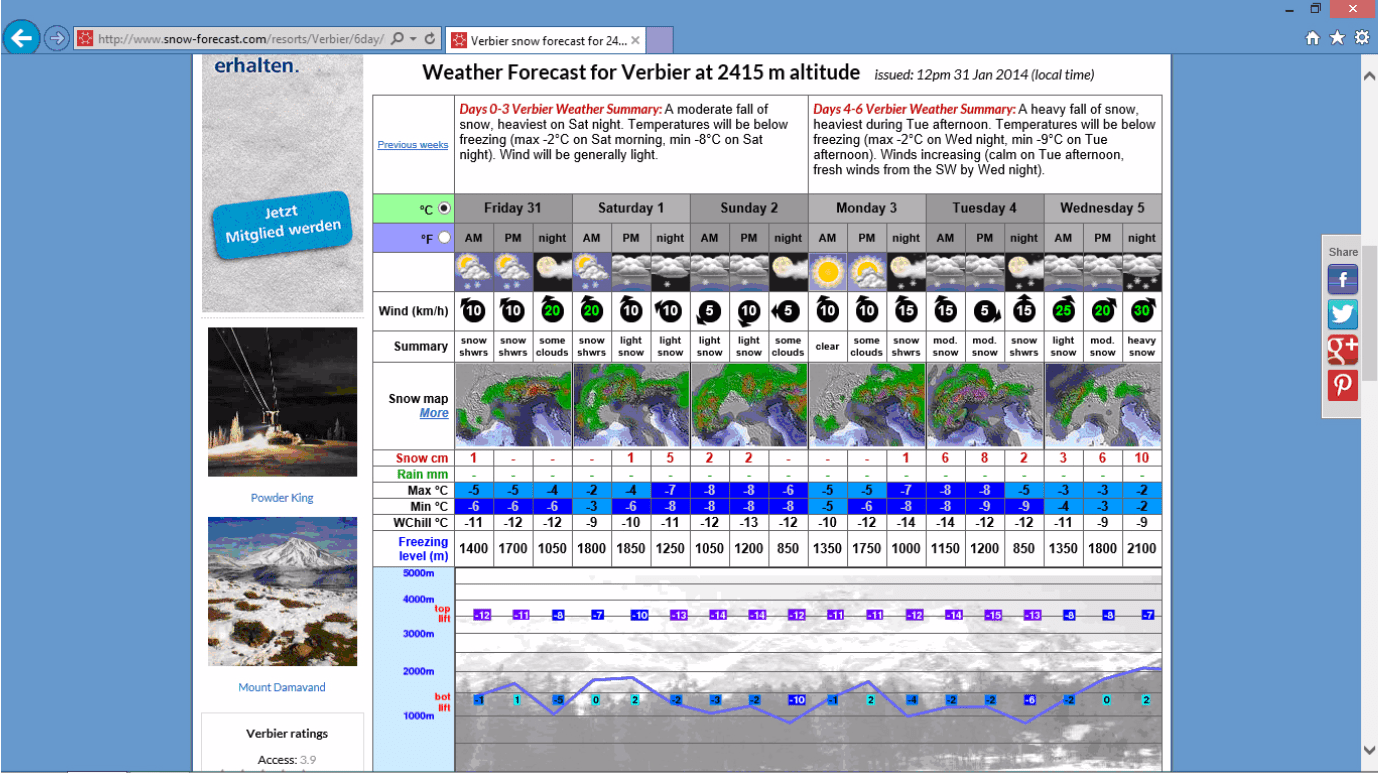 We happened to have a day off on Friday 31st and the weather was looking okay, so it was a chance to see if we could find any fresh tracks away from Verbier.  As it got nearer to the day of the tour, the weather forecast worsened a little but it still wasn’t too cold or too windy for January in the Alps.  We were planning on being out in the mountains for several hours with no shelter, so we didn’t want a -25oC January day!

The visibility was going to be okay.  This is important because you can gather a lot more information about the snow and avalanche situation around you if you can actually see the mountains.  It’s also a lot easier to make good route choices, based on what you’ve seen, if you can see where you want to go.

The weather looked good, so what did the avalanche forecast say? 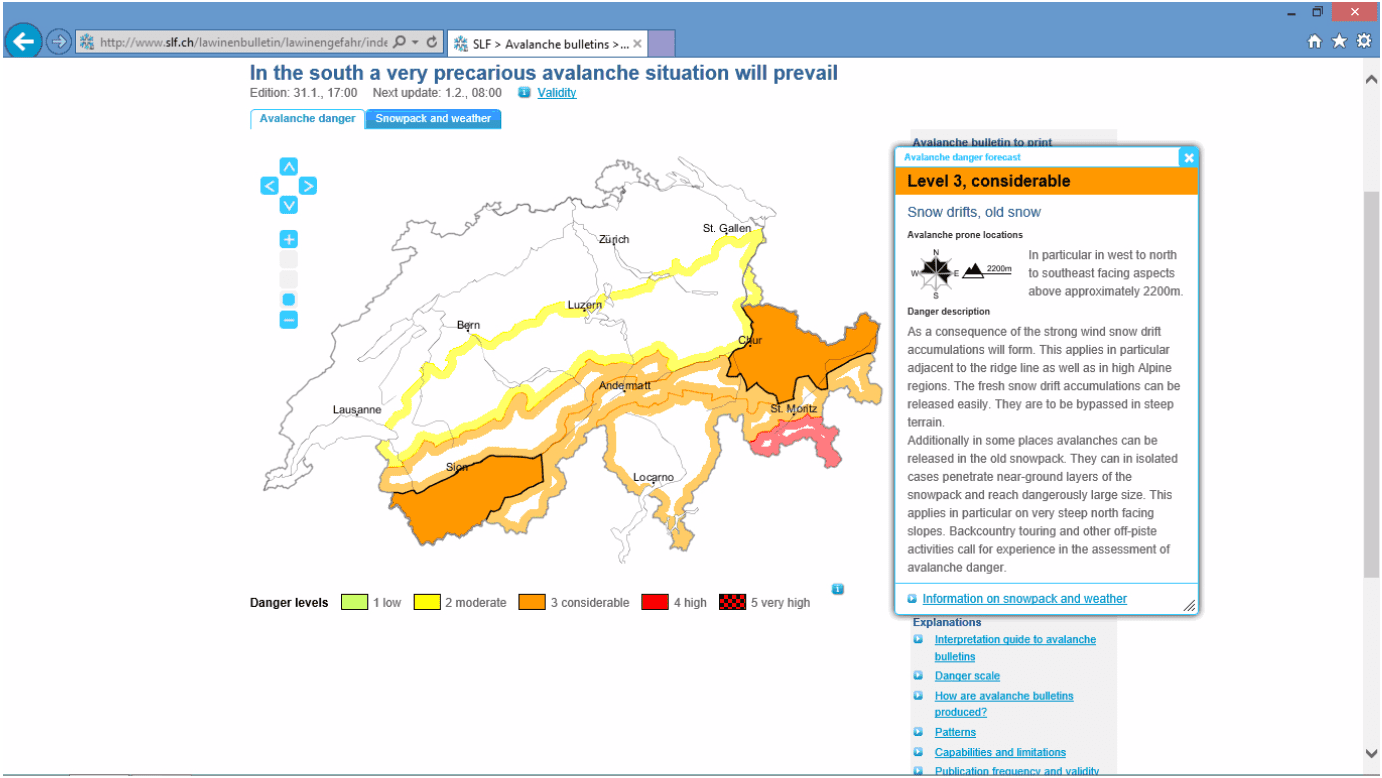 The wind had been moving large amounts of snow, which had been left by a storm a few days before.  The wind had come from the south and southwest and so the northeast slopes were potentially loaded with windslab.  There was also the danger of slopes of any aspect failing on the layer of depth hoar, which had been formed at the start of the season.

Our safest option would be to do a tour on some SW slopes.  The wind might have stripped a lot snow away from them and the skiing might not be brilliant but they would be a great deal safer than any other aspect.

The next stop was the guidebook.  Labande & Sangar’s, “Ski de Randonnée: Valais Central” has over 118 routes in it.  We needed a day tour, with 1,000m of ascent for the BASI EMS Logbook, mainly on SW aspects, with no technical mountaineering involved.  We could quickly discount a lot of tours in the book, as they were either on glaciers, required climbing gear, took more than one day or were too far to drive from Verbier.

In the end, we settled on the Bonhomme du Tsapi (2,802m), starting near Bourg Saint Pierre at 1650m.  This gave us the right amount of climb on the safer aspects and the start was about 45 minutes drive away.  Most of the route was below the 2,200m danger level on the avalanche forecast and we would start the climb in the relative safety of a forest. 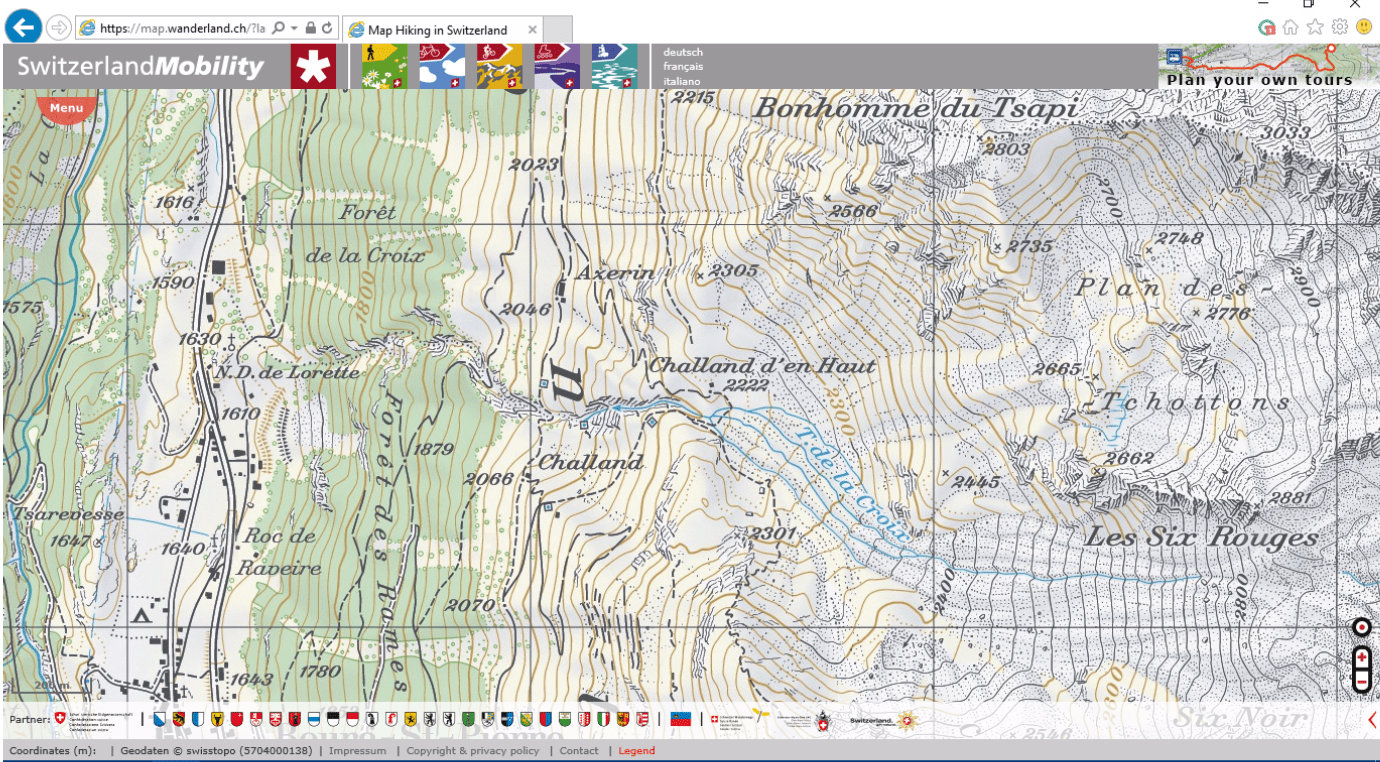 From the map, we could see that the route went up through the Forêt des Rames, crossed a gorge and then climbed up to the alpages of Azerin and Challand d’en Haut.  Then we’d go up into the bowl of the Plan des Tchottons and onto the summit of the Bonhomme du Tsapi.  To get onto the summit we would have two choices: either to go up to the col on the east ridge or to climb the south ridge.  The first would be easier going (less steep) but the second would be safer.

This was our plan but what did we find when we got to the mountain?  How did the day go?  Did we find those fresh tracks?  You can click this link to our 2014 blog to see the answers but here’s a preview:

January can be a quiet time for the ski school and with some of the instructors’ EMS Exams coming up, it was time to get the logbooks filled.  The start of the 2015 season had brought little snow, though the weather hadn’t been that sunny either.  What was it going to be like for our day off? 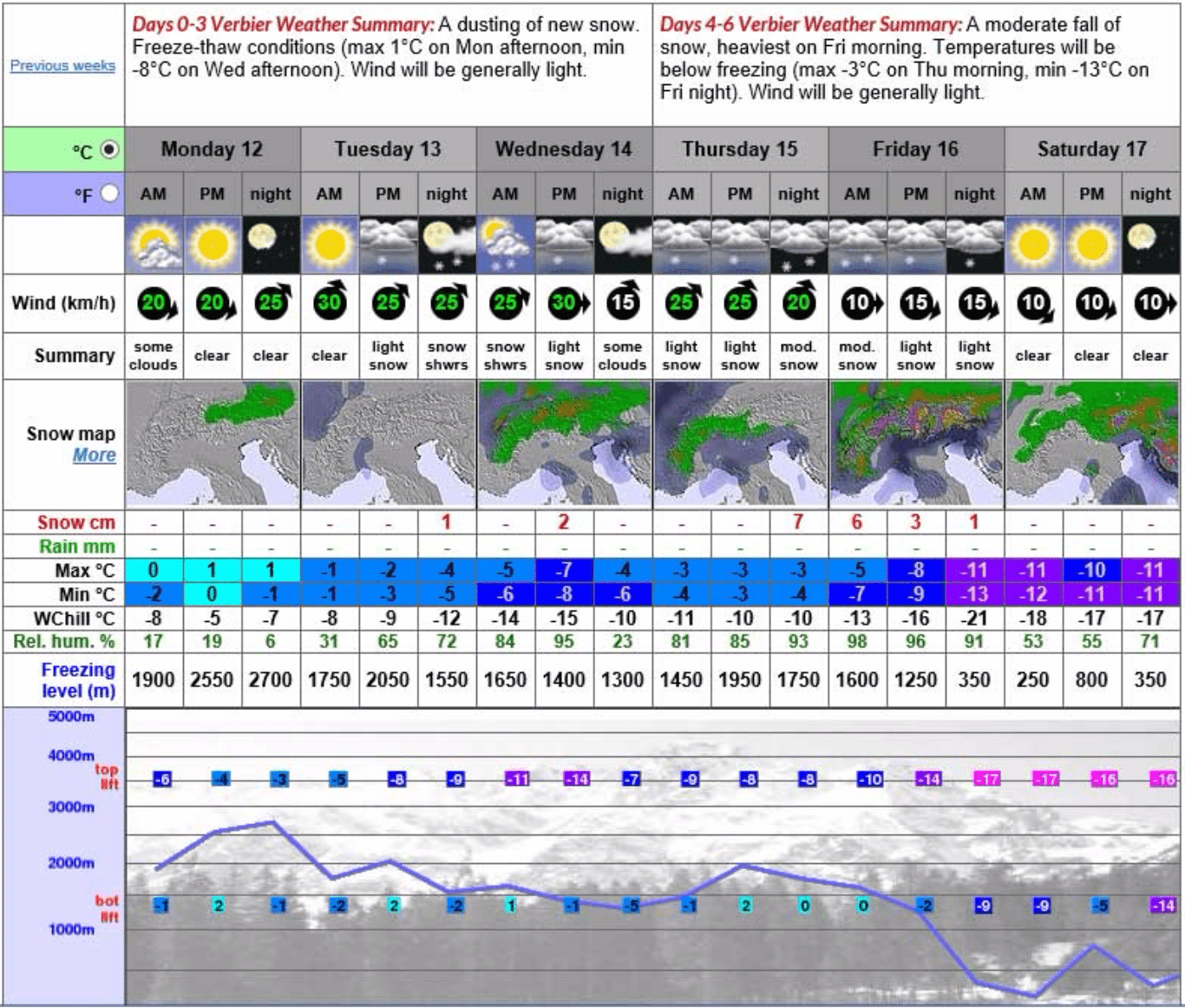 Monday was looking like it would be clear, not very cold and quite windy.  With a storm coming later in the week, things were going to get colder and windier, so Monday looked like the best day to go ski touring. 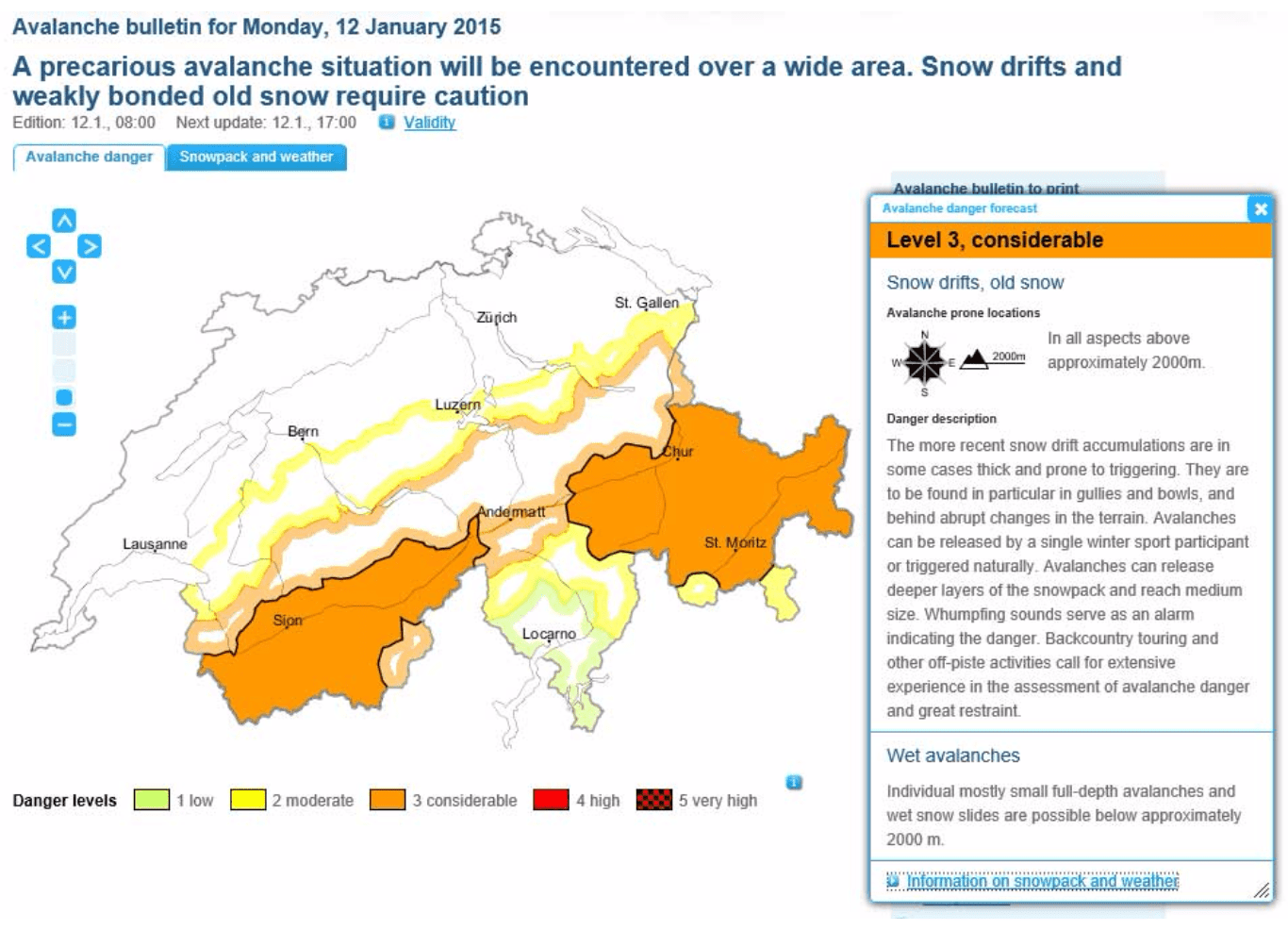 Even though it hadn’t snowed much recently, the avalanche risk was still CONSIDERABLE.  The winds had shifted loose snow around to form windslabs.  The cold nights & thin snowpack at the start of the season had caused depth hoar to form, which was still buried under the layers of snow.  In addition to this, the relatively warm temperatures meant that there was a risk of wet avalanches at lower altitudes and at the end of the day.  We were going to need an early start!

It was lucky that the forecast was predicting clear weather.  Again, the more things that you can see around and especially above you, the easier it is to make good choices about where to climb or whether to climb in the first place.  With the avalanche forecast giving risks on all possible slope aspects, we needed to choose a route that might allow us to use different aspects depending on what we could see on the ground.  We also needed a route where it would be easy to stop and ski back down, if things looked too dangerous.  The prime slope angle for avalanche release is 35o, so it would also be good to find a route with gentle slopes and no steep couloirs, either on it or above it.

Another factor in our route choice was that the snow line started at about 1500m.  The freezing level was going to be above 2,000m all day and so the snow would be getting wet and unpleasant to ski on.  We would need to find a route that started high up from a road or a ski lift or we’d have to walk. 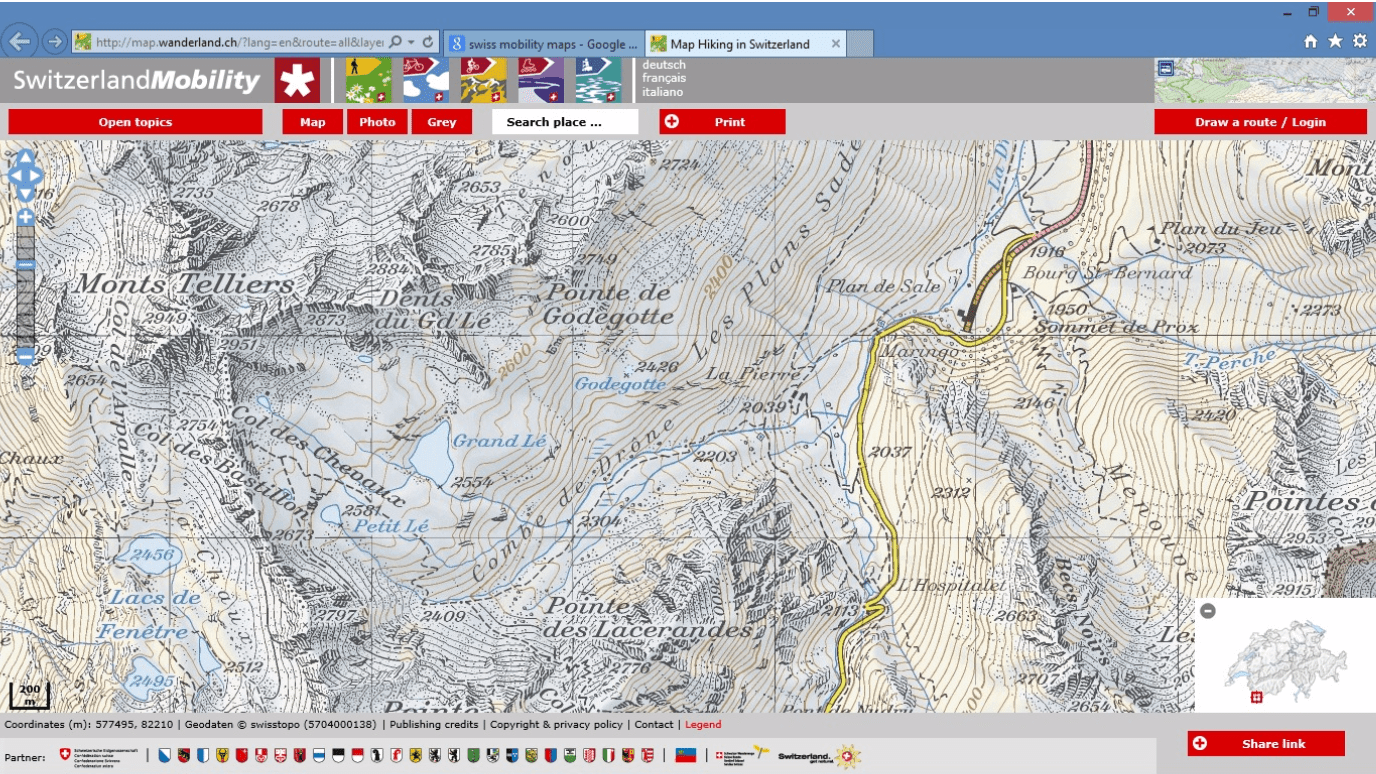 Monts Telliers’ (2,951m) eastern peak is a popular ski-touring goal.  You can park at Bourg Saint Bernard, at just over 1,900m, at the Swiss end of the Grand Saint Bernard tunnel.  This is a main route between Switzerland and Italy and so the road is nearly always open.

The ski tour goes up the valley of the Combe de Drône.  We’d be able to choose which side of the valley looked safest to skin up and the route would not be very steep.   It then passes in between the lakes of the Petit Lé and Grand Lé.  Again, we’d have lots of choices of where to travel here and the option to ski down easily.  The last section onto the east ridge of Mont Telliers would be steep but we would be able ski down if it looked too dangerous.

Another part of the picture was that a recent report from other ski-tourers, on CampToCamp, said that there was some snow on the mountain worth skiing. 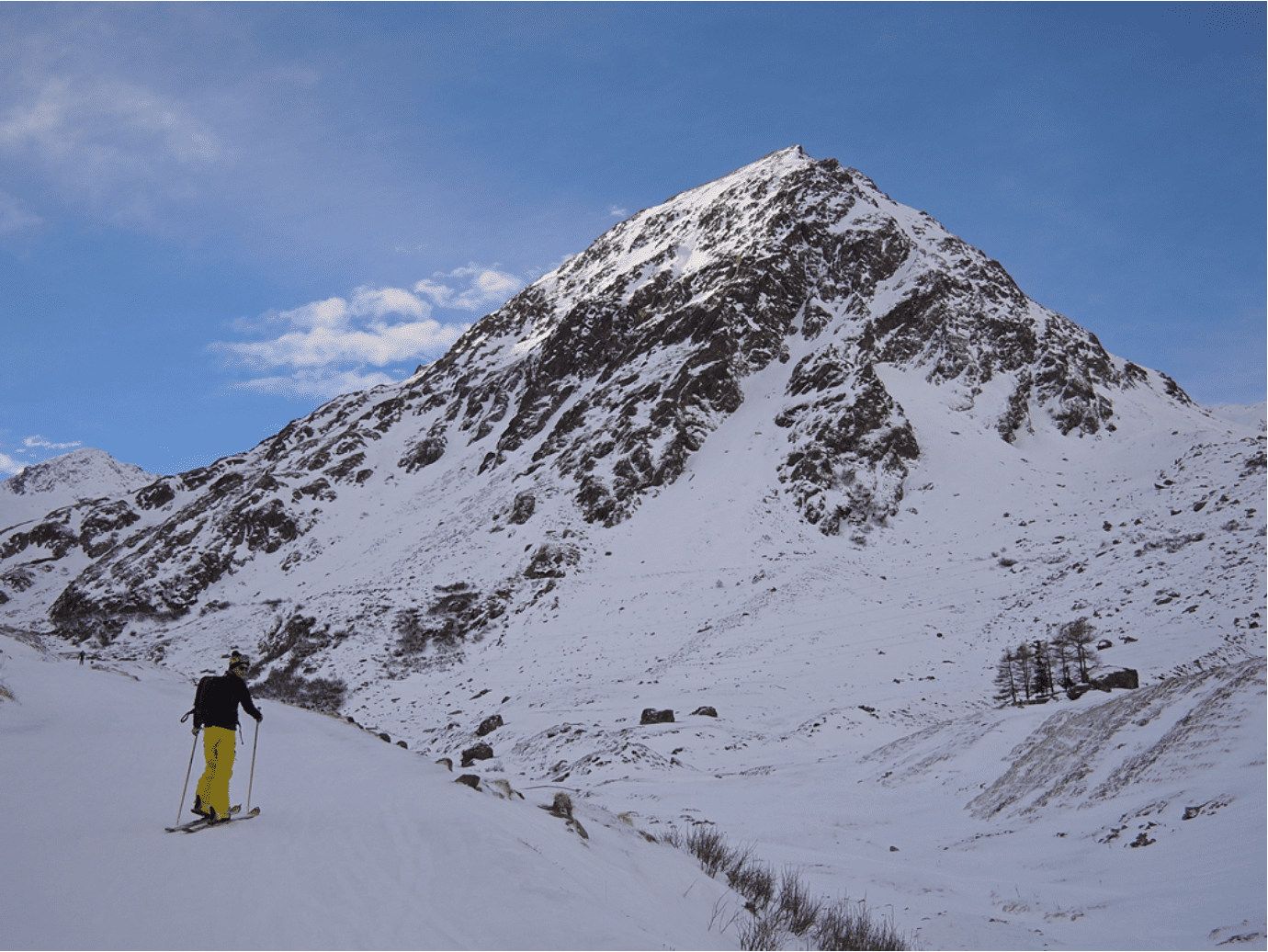 Leaving the summer road, with the entrance to the Combe de Drône on the right.

We arrived at the car park before 09:00H.  It was already busy with other ski tourers as this was one of the few places that you could put your skis on next the car that week.  The summer road, which leads up to the Saint Bernard monastery had good cover and so we set off up it.  The route into the Combe de Drône looked safe from avalanche, with little snow on it or on the Pointe des Lacerandes above it.  There was going to more danger of hitting a rock on the ski down.

As we skinned higher into the hills, the snow covered improved but it wasn’t packed windslab or deep drifts.  The sun came out and things started to get warm.  We followed a good skinning trail, put in by some groups ahead of us, stopping every now again to check the map and the snow conditions.  So far everything had looked safer than the forecast, though there was always the worrying thought of the depth hoar, buried at the bottom of the snowpack. 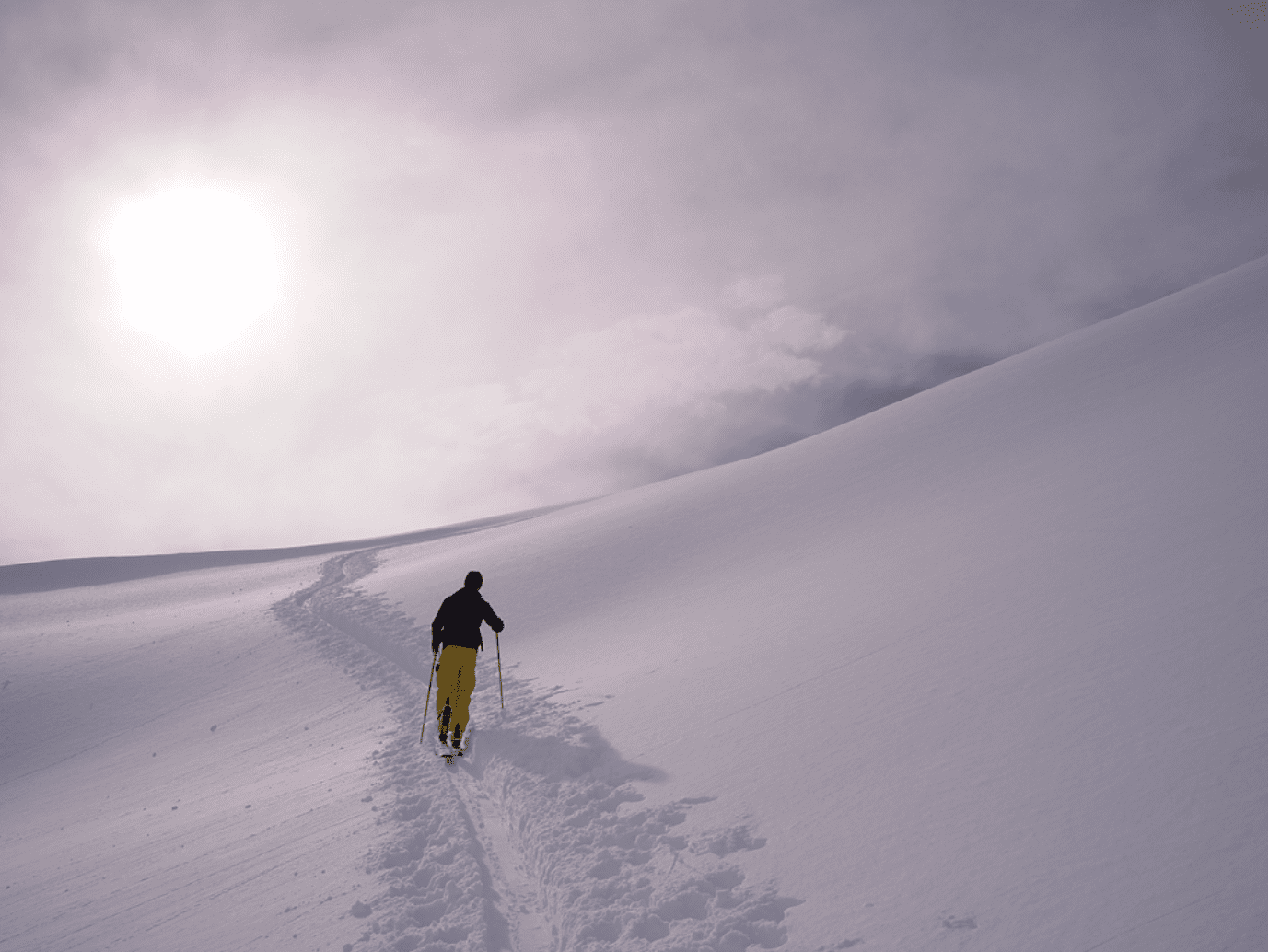 Above the Petit Lé and Grand Lé.

As we got nearer the summit, we started to cross areas of wind-blown snow.  These were about ankle deep but didn’t break away and seemed to be quite well bonded to the snow below.  However, the warmth of the sun was beginning to make the snow wet and sticky, especially on the southerly aspects, which would be on our steep ascent to and descent from the summit.

The last part of the route onto the east ridge was difficult due to wet snow and a steeper slope.  The snowpack was very thin in places, having been eroded by the wind.  This made it harder to get the skins to grip but also safer from avalanche.  We dumped the skis and walk the last, short section to arrive on the summit at about 13:00H.  Time to ski down before the snow became very warm and wet and dangerous. 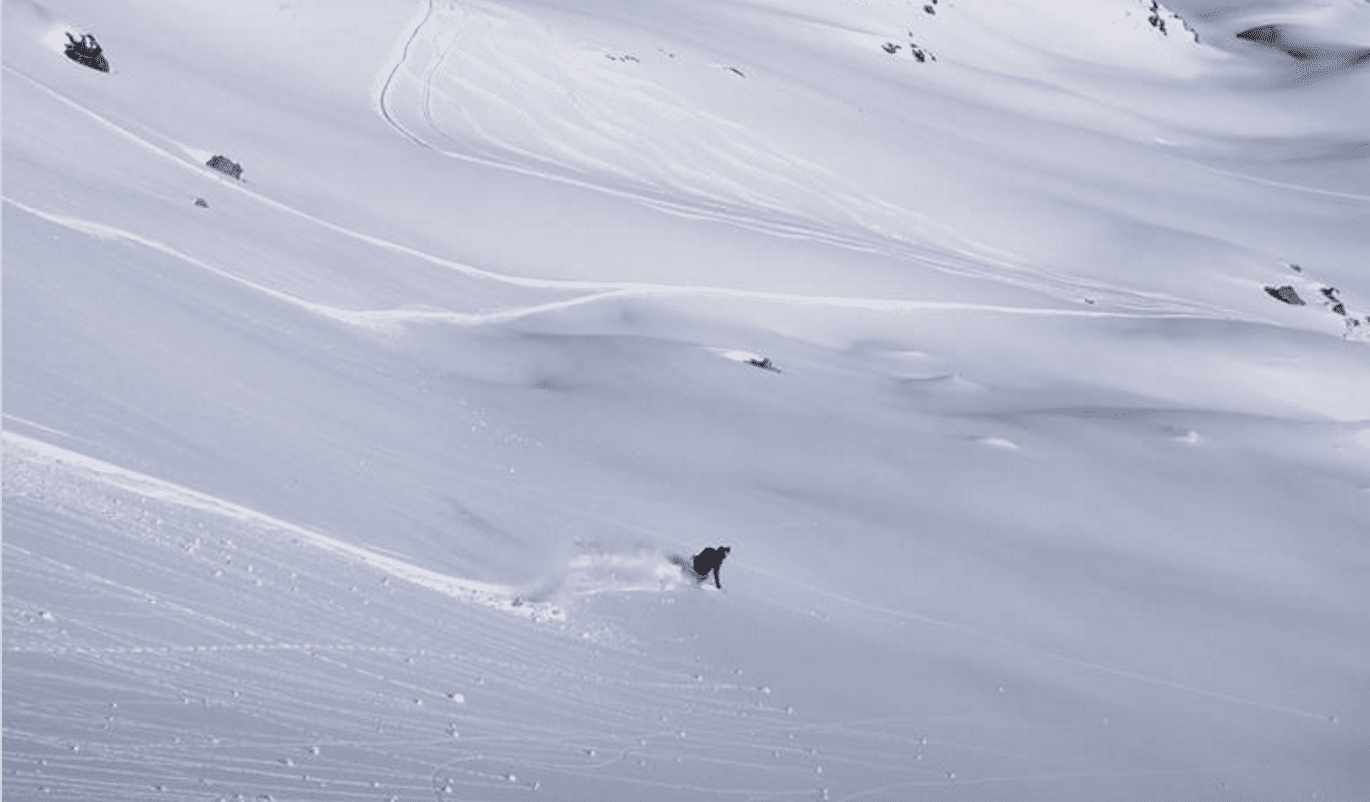 Skiing out of the Gouille de Lé, with the Grand Combin and Mont Vélan in the background.

The other people on the mountain had skied back down the skinning trail.  This was now very chopped up and getting wet and heavy from the sun.  The snow on the ascent had been stable and so we chose to ski into the Gouille de Lé.  This had no tracks and had seen less sun, so the snow looked far better.  However, it was also steeper and so we skied cautiously, in short sections, one by one, from island of safety to island of safety.  We also found some great snow!

We dropped into the head of the Combe de Drône and skied down its south side.  We were happy that the avalanche risk from the sparsely covered Pointe de Drône was low and used its shade to find lighter, untracked snow.  Lastly it was time to pick our way through the rocks at the mouth of the hanging valley and back down to the road and car park.

We’d had an excellent day out in the hills but the avalanche forecast had been Level 3 on all aspects: the avalanche risk had been “Considerable”.  However, we’d chosen a day with good weather, especially visibility.

We’d started early to give ourselves plenty of daylight time if anything went wrong.  We’d started from a place where we could have abandoned our original route and chosen a different one.  Our chosen route gave us options about which aspects we would skin and ski on and we always had the possibility of skiing back down if things looked bad.  As we climbed the mountain, we’d been looking at the snow under our feet and the snow on other slopes to gather information for other parts of the climb and the ski down.

We’d used planning, knowledge and awareness to have a safe and enjoyable day out on skis.