So here it is folks…. The final part of our ski instructor training blog series from Verbier’s own Jon and this time, we’re getting technical. Tom and Jon, as you may have read from our previous blogs in the series, run our ski instructor training school in Verbier. During training this season they filmed some sessions to use to assess technique. These are Jon’s thoughts reviewing one such video…..

“My friend, boss and, as we call him, Fearless Leader, Tom Waddington is mean to skis and boots. He bends them into submission. 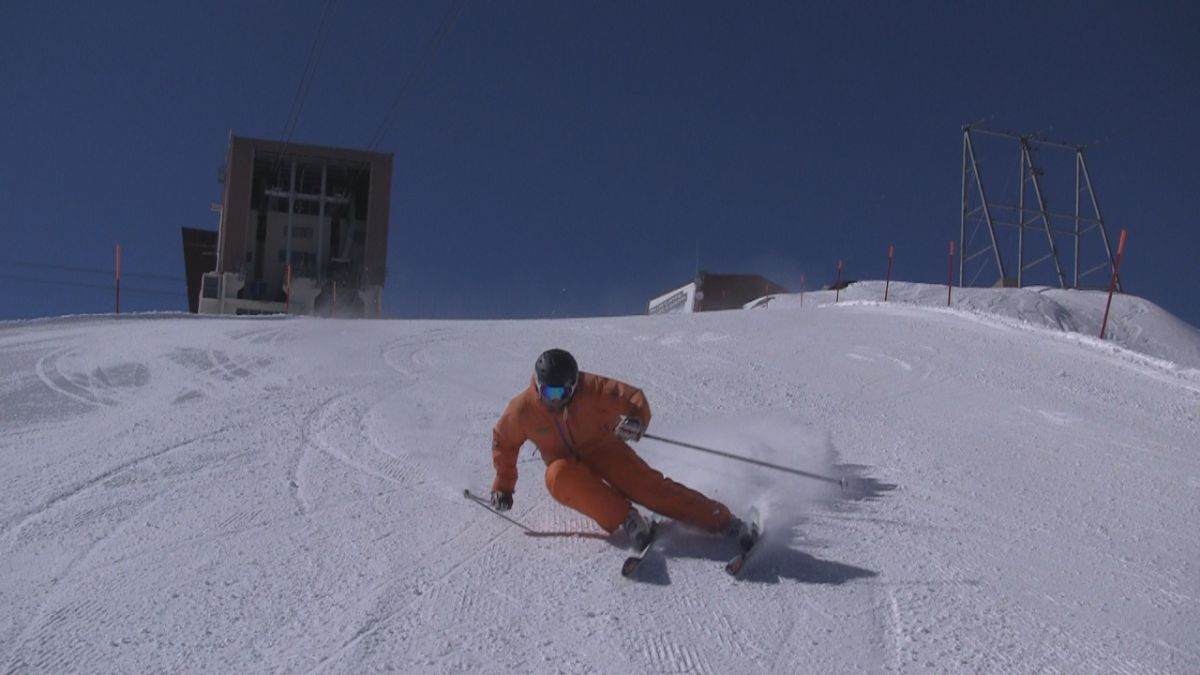 Tom bends a slalom ski into the state of confessing everything.

Tom and I know each other well, but we’ve never really skied together. We’ve talked about skiing (way too much if you ask his girlfriend Millie) and we’ve talked about the trainees we coach here in Verbier, but work has not allowed us to ski together. At the end of the season just ended, we skied and shot some video. Looking at the video, I notice: a lot is similar, some things are different. The difference that hits me as most important is where our hips are. Shakira had it right. Hips don’t lie. I want to show this through pictures. Tom is in front, I’m following… 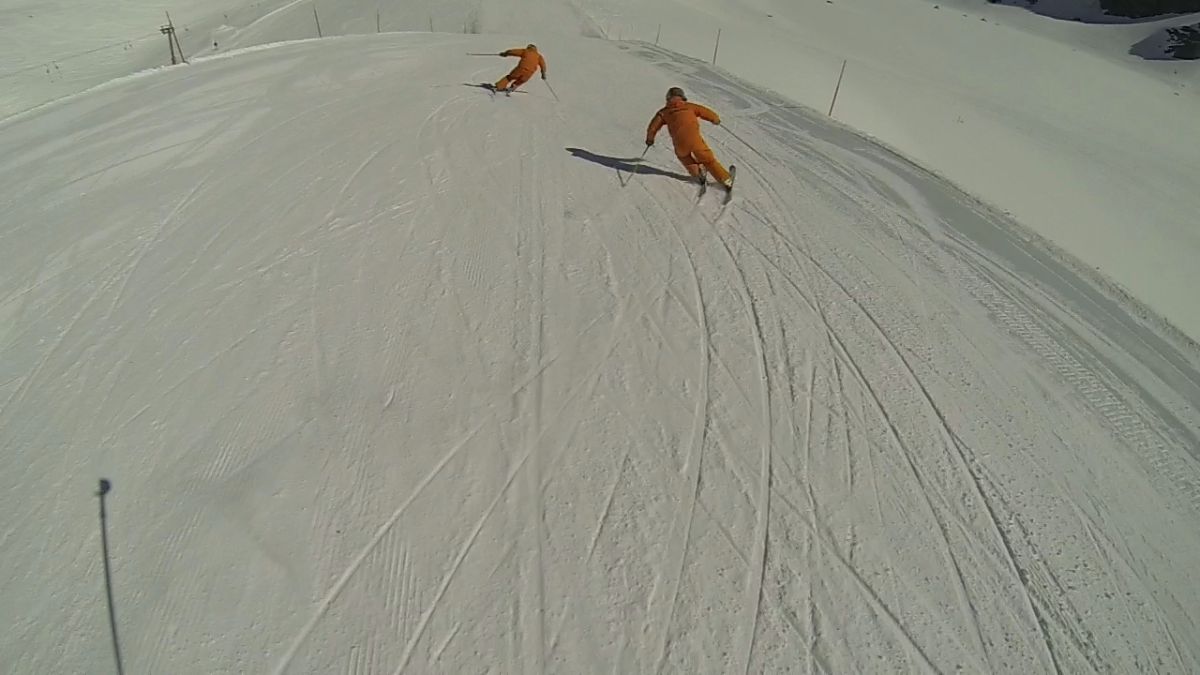 Everyone loves early edge. My skis are cutting more than Tom’s. Yes! 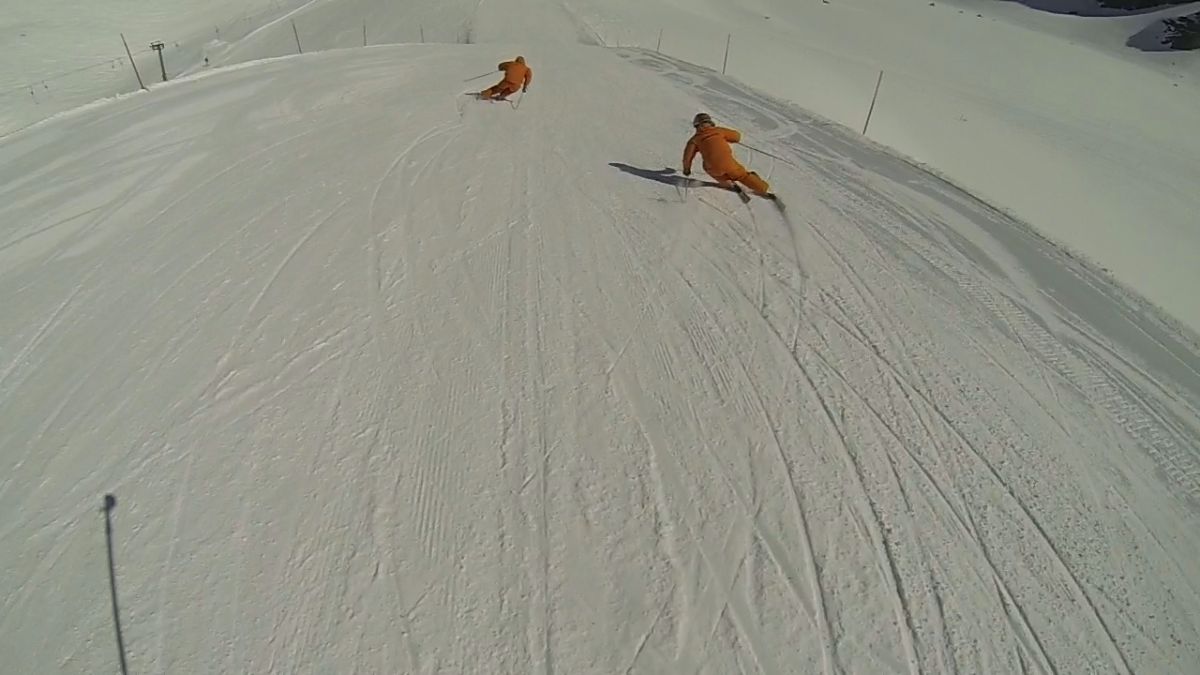 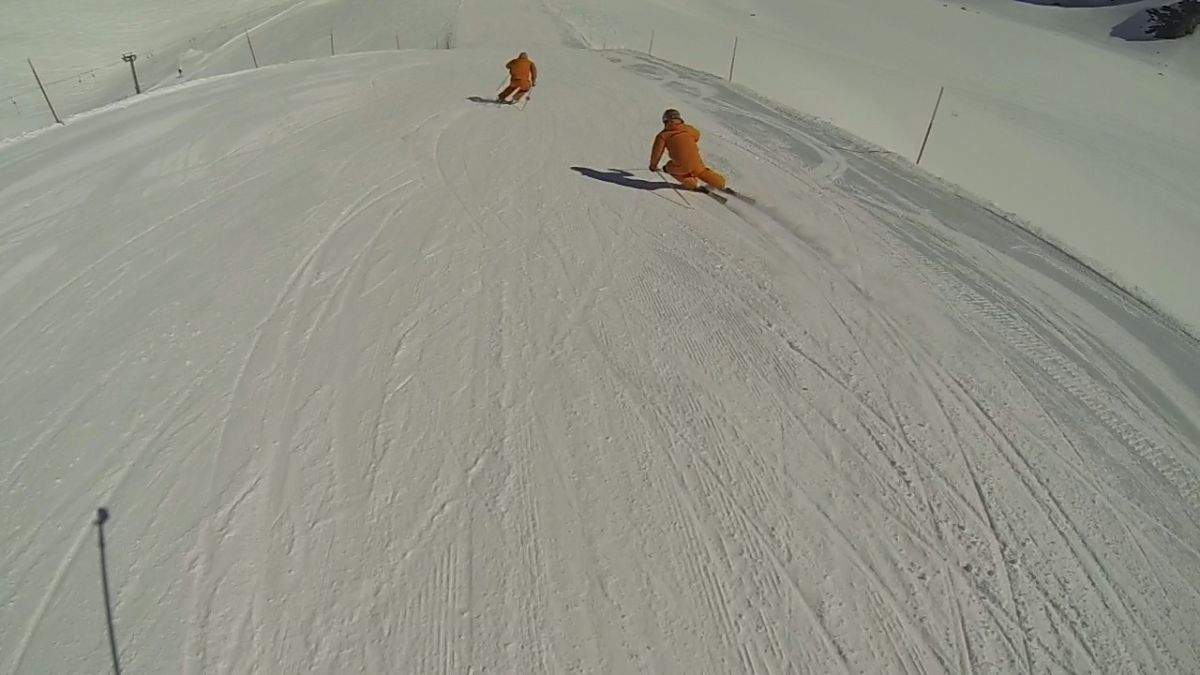 How is your turn already finished? No fair! I was looking so good in the start and even middle of this turn!

So Tom’s turn ended up better than mine. Why? Because it’s already done, and I still have some work to do to get off my edges. That’s why.

But how? Look at the pictures again. Yes, I’m on edge earlier and get higher edge angle. I love high edge angles. Some people call me the Edge (actually for entirely different, linguistic reasons, but still germane to the storyline). People compliment me on it. However, it is not the one correct answer, as the pictures show.

How can Tom get on edge later, be on a lower edge angle and still finish the turn before I do? Same type of ski, same speed, same pitch. Sure, Tom is a lot stronger but also heavier. So power to rate weight ratio is not the explanation here. Looking at the footage, I have a thought about my boots being too soft. My ankles are more bent than Tom’s and look weird. In the end, that’s not what’s going on. That’s looking at the trees, rather than the forest.

The forest is the hips. Hips don’t lie. While I’m busy sneaking onto an early edge from a low position, Tom resists the pressure from the previous turn and levers himself over the skis. Then he waits patiently. Hips sitting high, strong. I feel pretty good about myself. I’m lower, so my hips are further back, but I feel solid on the outside ski. It’s illusion. Winter snow is a sweet, lying mistress. My hip is too far inside, but I think more importantly, never crossed over high enough. I prioritized edge angle over a reset in the fore and aft plane – “getting forward”. The result is that Tom gets on, bends, and gets off his outside ski much quicker than I do. He works the ski efficiently, while I drag it out longer.

What happens when you take it to ice? The same, but while a skid starts showing for me, Tom continues to carve. True story. Hips don’t lie.”