Ski Touring. Those words send a shiver down the backs of many a die-hard piste skier. How can you justify going uphill when there are perfectly useable lifts? Do you have to wear lycra? Is it really worth it?

This season I took the plunge. I’d seen my friends racing uphill on a Wednesday night at the Le Praz – Courchevel Millet race and questioned their sanity. David Roberts wrote about the calming influence of skiing “wild” snow. More than that, our team were off exploring the wilderness of Norway and Iceland. The views they found were astonishing, and only those who could bear skinning up had the reward of seeing it in person.

When one of the adventurers above mentioned they were heading back to Norway in April – this time the Lyngen Alps – I knew I couldn’t miss another adventure.

I’d been ski touring before in Scotland years ago, so I figured I’d be able to handle whatever weather was thrown at me. Unfortunately the kit had been provided on those occasions, and from my memory was pretty heavy and clunky.

So I consulted Doctor Google – and ended up more confused than before. Fixed binding or pin? Second-hand or brand new? How light should the skis be? How wide? How expensive?!

I gave up and headed to The Boot Lab to chat to Gav, who sat down with me and worked out what was best. I’m a slim female so lightweight was priority, but we didn’t want to lose too much performance for the downhill part. Light skis do not make the best powder planks. We settled on pin bindings over fixed as the fixed bindings would make the whole setup much heavier.

The setup for me ended up being the Atomic Backland boot and my Blizzard Black Pearl 88s being refitted with Dynafit speed radical bindings. I couldn’t believe how light the boots were, or how easy to move around. Last but not least, some G3 skins for the Pearls. There was no turning back now.

As someone who’d done a bit of ski touring and cross-country skiing before, I wasn’t completely new to the “free the heel” concept. Yet I was still pretty nervous for my first skin up the piste. Rather than face the potential embarrassment of fiddling with kit, asking “silly” questions and flat-out falling over, I decided to go it alone. So I put on the skins, pulled on the ridiculously comfy boots and hit the Millet.

Five minutes later I thought I felt as though I was developing Asthma. I was stopping every five minutes, out of breath and confused about my route. I had to rethink my approach – like jogging, I quickly realised that pace was key. Despite taking twice the time I should have, I made it to Courchevel 1850 with my skis and life intact. Skiing back home took a bit of getting used to. The flex in touring boots is totally different to Alpine boots!

A few days later I gave it another go with a friend who snow-shoed up with me, which meant my pace was much better to manage.

I was apprehensive that I had invested in the kit and would hate it – but to my surprise it turns out this is the ONLY way I enjoy going up hill. If you asked me to hike up a munroe I’d be dragged up kicking and screaming. But for some reason, touring makes me happy. I think it might be how runners feel at the end of a jog – that elusive “runners high” but in touring form.

After a few weeks I decided it was time to go the full distance – from Le Praz all the way to “Plum” – a 1000m vertical ascent. I was amazed in just a few weeks, I was already much fitter than before – even overtaking other tourers. I started touring 3 times a week, trying out different pistes, resorts and pathways. Touring with friends, dogs and much fitter people has pushed me – but I’ve loved every minute. 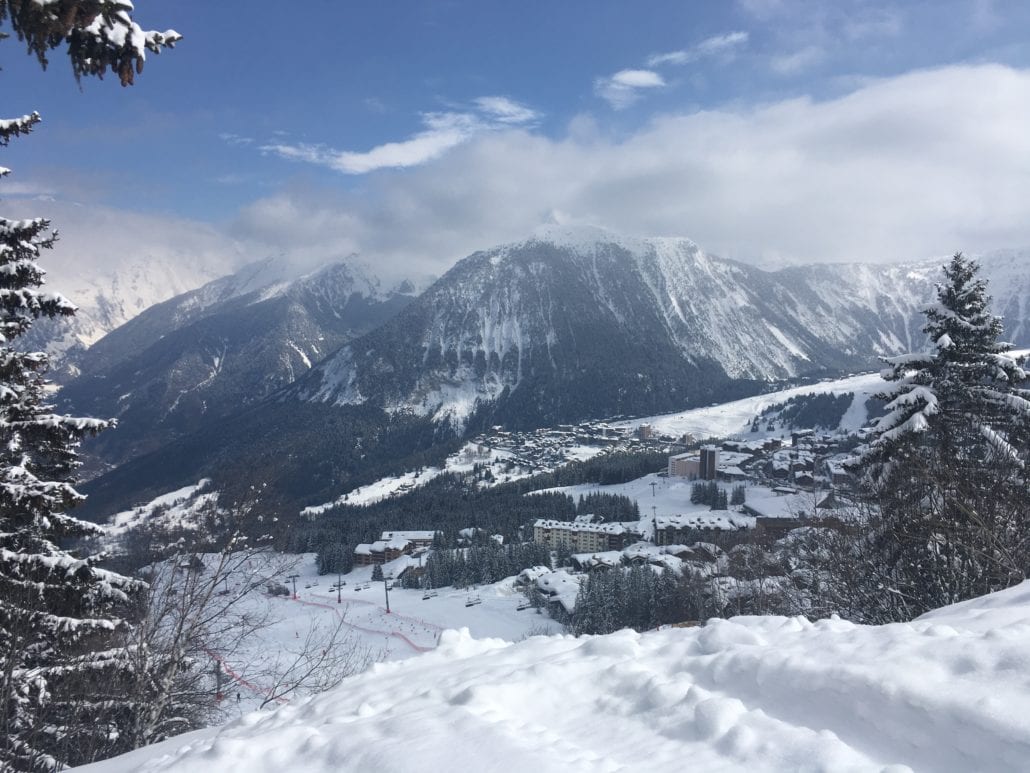 The View from the Top of Courchevel’s Plum Route

With the Norway trip just one week away, I’m excited and also a little nervous. We’ll be skinning up untouched slopes and skiing down perfect powder. This time I’ll be skinning with much more experienced tourers, and with avalanche kit on board. Wish me luck!

Check back in a few weeks for our Norway highlights – or check out our last trip here.