This post is the last of a 3-part series relating to alpine ski fitness. We advise you read our guide to planning your fitness and key areas to focus on first.

Now we know which areas of fitness have the largest impact on performance, the next step is record our current fitness level (stage 3 of checklist) so we can get a deeper understanding of our strengths and weakness in these areas (stage 4).

There are heaps of fitness tests out there: some you might have already done, some you might not have. It can be difficult to know which ones to use – some involve expensive equipment and others are simply just not appropriate for our sport.

Now I am going to assume that most of you don’t have access to high tech sport science laboratories / Batcaves, so my aim once again will be to use science to help us pick out some fitness tests that can be done on a budget. This by no means is a comprehensive and exhaustive review of all tests that you can perform, but I will try to give a clear science based rational for each test (100% free of boot-room chat).

The United States Sports Academy (USSA) Sport Science Department has come up with an excellent series of fitness tests called The Skill Quest Conditioning Assessment (SQCA). The USSA has designed the test to go along with the US Ski Teams Skills Quest program as part of a way to monitor the progress of juniors skiers off the hill.

The tests cover ages from 2 up to 17+ years old. We will focus on the 17+ age range (phase 6). I know some of you might be a little older, but we are all young at heart, plus the USSA are classing athletes in phase 6 as “biologically matured”.

In brief the tests for Phase 6 covers these key areas;

Due to the highly technical nature of skiing, it is vital to be able to coordinate the whole body. Doing so in a controlled and balanced manner helps the skier correctly execute the technical skills required for a high level performance. It wont be a huge surprise to you to know that due to the highly technical nature of skiing, “time on snow” is vital to aid development of athletic performance (Nygaard et al. 1978). Unfortunately, we cant always be on snow as it tends to melt… 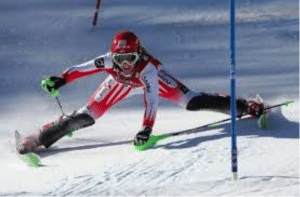 When training on snow is limited or impractical it is vitally important to make sure that your training in the gym is both effective and relevant (Laurent et al., 1993; Bachrach and Duvillard 1995).

To keep track of how your off-snow training is affecting your balance and coordination skills, it is important to find a test that you can perform that tests both. Luckily the USSA has us covered.

Place the balance beam on the floor. If you have protective foam mats, place them beside the beam.

The athlete should complete the following whilst keeping both hands on their head:

Record a score out of 10 based on how far the athlete progressed in the test.

If you’ve read the second post, you will already know that strength is an important component for skiing fitness, but is not the be all and end all. No correlation was found between the leg strength of elite skiers and their world cup standings. However, leg strength in skiers was found to be higher than in other sports. So strength does count for something, but mainly in slower movements and during eccentric contractions.

In a real-world context, this means that beyond a certain minimum level of strength, no further gains on performance are made (Neumayr et al., 2003). The same can be said for flexibility (Anderson and Montgomery. 1988). That being said, insufficient strength and flexibility lowers your ability to deal with certain movements, such as the high forces and the eccentrically loaded (muscle lengthening under tension) squatting actions that are required during skiing. This can even lead to higher risk of injuries, of the knee (Turnbull et al., 2009). This highlights the importance of testing your squatting movement strength and functional movement / flexibility at your joints.

The test detailed below by the USSA focuses more on flexibility and functional movement, rather than measuring the contractile force generated during the movements. This is an ideal test for trainees new to fitness training as it focuses on correct lifting technique. 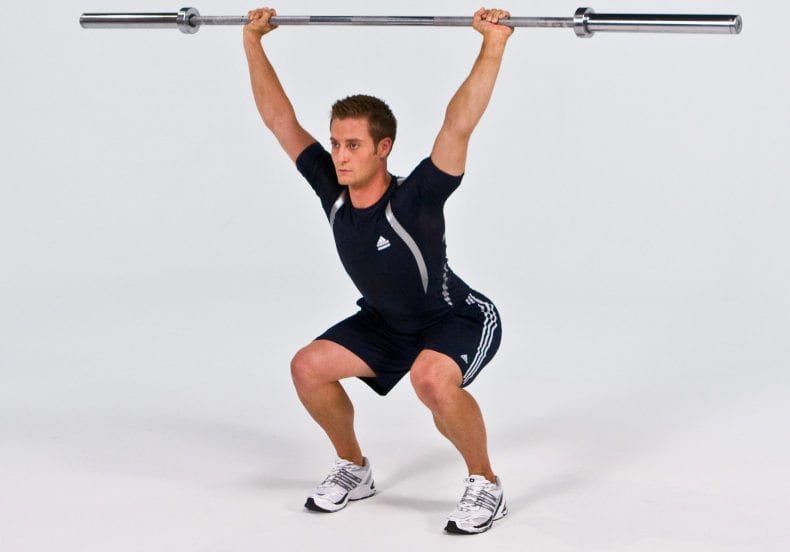 Position the broomstick above the head with arms angled out at 45 degrees. Feet should be slightly wider than hips with toes pointed slightly outward. Start by holding the stick on the head and elbows at 90 degrees then raise the stick up and lock out elbows.

Ask the athlete to squat down as far as he/she can go whilst keeping the broom parallel to the floor, then stand up and repeat up to 5 times if necessary. Instruct the athlete to keep the chest up and back flat and keep the elbows locked out. If the athlete cannot perform the squat correctly, place the 4×2 under the heels and repeat the test.

Analyse and score the technique according to the following criteria:

And for a optional extra should you so desire…

Rationale for inclusion: This test is a progression for those athletes who are consistently scoring gold on the overhead squat test. It is harder and requires more strength. It also assesses any imbalances between left and right side strength.

Assess and score the technique according to the following criteria:

Assess and score each leg independently. The athlete’s total score is the average of the right leg trial and the left leg trial.

Anaerobic energy production reportedly accounts for 65% of all energy production during alpine ski performance (Turnbull et al. 2009). Furthermore, the vertical jump test on anaerobic power below has been found by many scientific studies as the best fitness indicator of skier performance (Duvillard, 1995; White & Johnson, 1993). Sounds pretty conclusive then, and its pretty easy to perform. 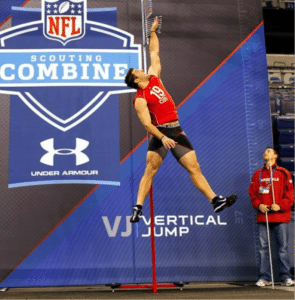 Assess and score according to the following norms:

As we have already learnt, anaerobic energy systems are very important to skiing performance. The exercise above tests your one-off explosive anaerobic power and the next assesses a estimate of your anaerobic capacity. This is the maximal amount of energy (or ATP for you nerds out there) you can produce via anaerobic energy synthesis. There are many tests for anaerobic capacity, the gold standard test being the 30-second or 60-second Wingate Test. This one can be a bit difficult to perform on a budget in your back garden as you need an exercise bike, weights and other gizmos, so we’ll leave that one alone.

The USSA designed a similar test for anaerobic capacity includes a 60 second 40cm lateral box jump. This test is brilliant and has actually been found by science to be (along with the HEX test) the best anaerobic capacity test that correlates with skiing performance. This emphasises the need to move the feet under the centre of mass during the box jump, which is a crucial aspect of skiing itself (Anderson et al. 1990). 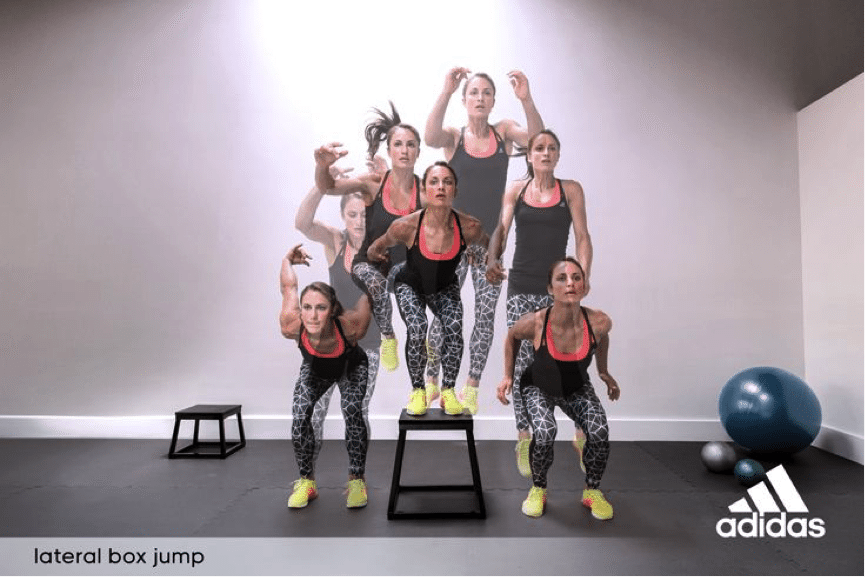 Athlete stands on the box. On “go”, he or she is to perform as many box jumps as possible within 60 seconds. The jumping goes from the top of the box, jumping up and down alternating between left and right sides.

Unfortunately there is not much normative data that is readily available for this test, even though it has such a high scientific value. Luckily I found some data from Alpine Ontario Alpin. It’s not clear where they have got their test scores from and its only for under 18’s, so you might have to add a pitch of salt when you are making your gap analysis.

Aerobic capacity, as we discovered in the last post, is not a component of fitness that has a hugely significant effect on performance during skiing. It is more likely to aid performance indirectly. Having a good aerobic capacity allows you to recover from a skiing performance faster, which is advantageous in the long term as it allows you to fit in more training runs within a training session and therefore maximising your time on snow.

The gold standard test for aerobic capacity is a VO2 Max test, unfortunately, this test is impractical and expensive as it requires a trip to the Batcave again… Luckily there are heaps of estimative test you can perform that don’t need lots of equipment. The 20 meter Multi Stage Fitness Test (MSFT), aka the dreaded BLEEP TEST, seems to be the gold standard field test for indirectly measuring aerobic capacity by ski teams. It is claimed in Turnbull et al (2009) that the 180 turns at the end of each shuttle phase makes it more specific to the actions of skiing (compared to other tests that involve straight line runs).

Therefore if you want to get a good idea of your aerobic fitness, embrace the bleeps. 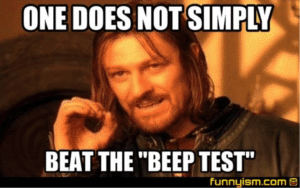 These are the results from Alpine Ontario Alpin, detailing the norms for under 18’s elite skiers.

These are the norms for MSFT taken from Bizley et all (2010).

So to summarise, here are the list of the main fitness tests you should be trying to perform at the start of your program and then roughly every 6 weeks, so you’re keeping track of things throughout your summer fitness-training program:

Now go DO them and remember this: if its the first time you have done them, you are guaranteed to make a PB! 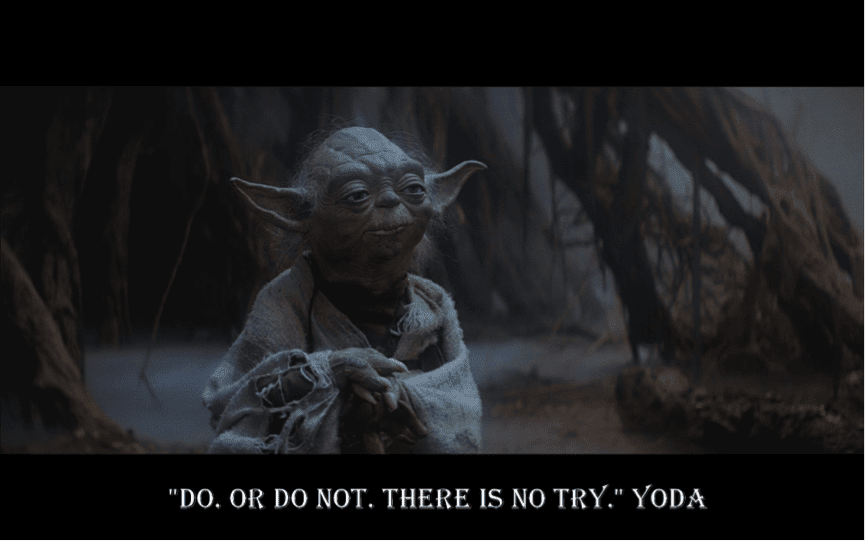 August 31, 2016/by Guy Coles
https://www.instructorcourses.skinewgen.com/wp-content/uploads/Vertical-jump-test-G-Blog.png 881 865 Guy Coles https://www.instructorcourses.skinewgen.com/wp-content/uploads/ski-instructors-logo-no-strap-1.png Guy Coles2016-08-31 15:27:372018-01-31 11:39:36How to Keep Track of Your Fitness
Scroll to top
We use cookies to ensure that we give you the best experience on our website. If you continue to use this site we will assume that you are happy with it.OkRead more