At Interski – the four-yearly congress for national snowsports instructor alliances – I met a bunch of very interesting people. To me, that was one of the best things about the whole thing. I met up with colleagues from around the world that I already knew. I also met new friends. Two of those new friends are Australian, Paul Lorenz and Reilly McGlashan, and they approached a few instructors at Interski to see if they were interested in filming an instructional video on an Austrian glacier of Hintertux in the early summer of 2016.

I was much honored to be asked to join. I was nervous about this filming for the whole winter. I’ve never in my life been surrounded by this kind of skiers. I was like a star struck child – nervous and shy, even letting nerves get to me at the top of runs. More so than at Interski.

­­The target audience for these videos – there will be two videos – are skiers who are already technically advanced. In the video, we were asked to talk about what we think about in our own skiing – not simply what our respective associations “preaches” or common problems etc.

There was six of us being filmed and Projected Productions, the company Paul and Reilly have set up for these and coming videos, came out with four guys. In addition to Paul and Reilly, we had James Wilkins and Robert “Benjy” Benjamin helping out. James is an excellent photographer and he got some really sweet photos during the filming. The level of professionalism was like nothing I’ve experienced before. They’ve pulled out all stops to make this video look and sound as good as possible. 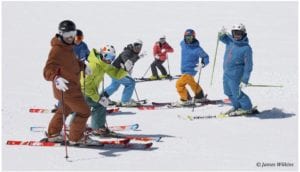 The team ready to go

Some of the skiers are pretty well known online. Some of them not so much. What’s true about all of them is that they are absolutely fantastic people. They also make you stop what you’re doing to watch them ski. At least I did. The names are:

Nadine Grünenfelder – Swiss demo team member who is so good her ski sponsor gives her skis with her name featured on the top sheet.

Andreas Spettel – Austrian demo team member, who skis with such precision I started calling him Dr. Spettel when he coached me in Treble Cone, New Zealand, a few years ago.

Jonathan Ballou – US demo team member, who is always smooth over the snow while getting great deflection.

Alex Taugwalder – Swiss demo team member who is incredibly dynamic. He goes through four pairs of slalom skis per winter. I think they just give up on life underneath his boots. 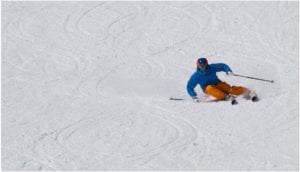 A demo in action

The Projected Productions team made us feel welcome and special upon arrival by handing over branded caps and gloves. (I’m nervous about whether I can pull off the flat brim in the videos – after all, I’m 43 years old and bald…) They also did everything they could to help us feel comfortable and focused along the way – whether it was by carrying second pairs of skis or helping us feel “natural” talking to a camera for extended periods of time.

The plan is to release the first video at the end of July and the next at the end of November. It all depends on how busy Paul and Reilly are during the southern winter – Reilly will make the music for the video and Paul will do the editing.

The videos will be available for purchase online and I would recommend buying them both. I bought last year’s video and picked up some new ideas and concepts that I’ve used in my own skiing as well as in my coaching during the past winter.